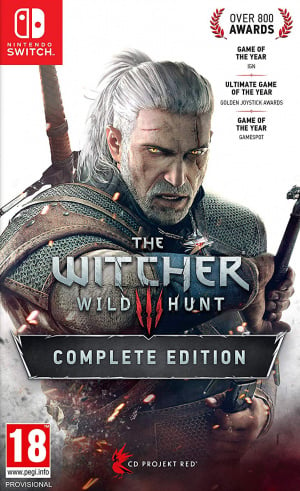 2019
8.7
Game Rating
User Ratings: 551
Our Review: 9/10
Nintendo Switch
246
Review The Witcher 3: Wild Hunt – Complete Edition – An Incredible Action-RPG Stands Strong On Switch
Return of the White Frost
Originally released on other platforms back in 2015, The Witcher 3: Wild Hunt arrives on Nintendo Switch over four years later, and it’s somewhat surreal to hold such a gigantic game in the palm of your hands. Ported over by Saber Interactive, this is The Witcher 3 in almost all of its glory. The same brilliant base game,…
40
Guide Best Detective Games On Nintendo Switch
Grab your trilby and trench coat
Everyone loves a good mystery, and even more so if they’re the one who gets to solve it. The detective genre has evolved a great deal since its point-and-click adventure game roots, and this list proves how much things have changed. In fact, the games that we’re including in this list range from typical noir…
142
Guide Best Switch Ports – The Most Impressive Ports On Nintendo Switch
Port city
Few could have predicted just how successful Nintendo’s hybrid console would be prior to launch back in March 2017. For the preceding decade or so, third-party publishers tended to overlook Nintendo’s hardware for a variety of reasons, but Switch has attracted a huge number of the world’s premier developers back to Nintendo hardware, some…
5
Guide Best Character Builds For Geralt In The Witcher 3 On Nintendo Switch
Melee, spell-casting or somewhere in-between?
The Witcher 3: Wild Hunt – Complete Edition is available on Switch, and if you’re coming to the world of the Continent with fresh eyes, it can all be a bit overwhelming. That’s why we’re here to help. Character progression in The Witcher 3 is very complex, and one of the first ‘pressure points’ you’ll…
18
Guide Should I Simulate Witcher 2 Save In Witcher 3 For Nintendo Switch?
What does ‘simulate a Witcher 2 save’ mean?
What does ‘simulate a Witcher 2 save’ mean in The Witcher 3? With The Witcher 3: Wild Hunt – Complete Edition arriving on Switch, no doubt many new players will be wondering what this small detail at the start of the game means. In this guide, we’ll break the whole thing down, and hopefully help you decide…
20
Guide The Witcher 3 On Nintendo Switch – 10 Gameplay Settings To Check Out Before Starting
Advice on options in The Witcher 3
The Witcher 3 on Nintendo Switch comes with a lot of options that you can tweak — and many of them can have a significant effect on your gameplay experience. In this guide, we’re going to run through what we think are the settings that you should at least consider checking out before you start a new game. The…
Winner of over 250 Game of the Year awards, The Witcher 3: Wild Hunt is a story-driven, open-world adventure set in a dark fantasy universe.
You are Geralt of Rivia, mercenary monster slayer. At your disposal is every tool of the trade: razor-sharp swords, lethal mixtures, stealthy crossbows, and powerful combat magic. Before you stands a war-torn, monster-infested continent you can explore at will. Your current contract? Tracking down the Child of Prophecy, a living weapon that can alter the shape of the world.
The Complete Edition contains every piece of downloadable content released for the game, including two massive story expansions: Hearts of Stone & Blood and Wine. It’s the perfect opportunity to enter this world for the first time or relive the adventure — on the go!
– A gigantic open world to explore.
Visit the luxurious and corrupt city of Novigrad, face the frigid cold of the wind-swept Skellige islands, and challenge the dark forces roaming the forlorn, ravaged No Man’s Land. Sail through open seas, dive in search of long lost artefacts or gallop your mount into combat — the world of the Witcher beckons to be explored.
– An unparalleled novel-like story spanning over 150 hours of gameplay.
With over 100 hours of core and side-quest gameplay and over 50 hours of additional content, The Witcher 3: Wild Hunt combines the intense, plot-driven pull of traditional RPGs with the freedom of choice only open-world games can offer. Make choices and face their consequences to unlock endings tailored to how you play.
– Now on Nintendo Switch — play at home and on the go.
Developed to take advantage of everything Nintendo Switch has to offer, the game delivers a truly powerful on-the-go experience.
Please note that some external links on this page are affiliate links, which means if you click them and make a purchase we may receive a small percentage of the sale. Please read our FTC Disclosure for more information.
Comments (7)

This game is EPIC! So awesome it’s come to our favourite console.

I pre-ordered this game because it’s The Witcher 3, so yeah of course it was a day one purchase.
The game is very good in handheld mode, but when you play it in docked mode, you can definitely see the graphical downgrade to get it to work on the Switch. It’s still definitely worth the purchase if not for anything else, but the ability to play The Witcher III on the go.
If you own a PS4 and plan to play this game most of the time at home, I would suggest buying it on that platform. If you intend to play this game away from home, it’s worth picking up on the Switch.

I own the game on other platforms as well, but I most say the full game on cartridge and on the Nintendo Switch is mind boggling!
What a fantastic port!!!

good loading speed.
traditional US style campaign,quests.
and I like roach(Always he reassured me on wild.)
sophisticated card game includes.
★7

We’ve all seen the message-board discussions comparing The Witcher 3 (W3) with Breath of the Wild (BotW). For anyone that hasn’t spent some time playing both, the comparisons may seem natural given the superficial similarities in settings, weapons, basic stories, and open-world gameplay. Having now played both games, though, I firmly understand that these games are nothing alike where it probably counts the most: player accessibility.
BotW is a stand-alone Action-Adventure game that cares about introducing players to its story and gameplay concepts without overwhelming them; it masterfully teaches the player how to play as Link regains his memories during progression through the game. On the other hand, W3 is the conclusion to a major Action-RPG series that isn’t concerned about catching you up on what you’ve missed previously; it throws the full weight of it’s back-story and character ability systems at you and assumes that proceeding through the story (and perhaps locating its simulated soft-core pornography) is motivation enough to work through the frustration that will initially saturate the experience for new players.
In the course of playing through W3’s Prologue and the beginning of Chapter 1, I came across a dozen or more scenarios that I was completely unprepared to face by the scripted in-game tutorials or the literally hundreds of pop-up messages in the menu system. In early occurrences, I simply chalked it up to needing to familiarize myself further with the game’s many combat & crafting abilities. I would then spend some time reading online guides learning how to handle the situation and some time in the game-world practicing. My eventual triumphs were satisfying, but almost immediately followed by the same cycle in a new setting. By the beginning of Chapter 1, when I was presented with a pop-up that explained the game had automatically selected a quest intended for level 30+ players to pursue—even though it was aware that my Geralt was currently only level 3—I realized that the frustration was unlikely to lessen no matter how much I practiced because the game’s designers just didn’t care about players like me.
I have no doubts that W3 contains a beautiful, rich open world with fascinating side quests, detailed graphics, moving music, and voice acting of the highest quality—the Prologue certainly did. But the package that contains those elements is obscured by a mess of clunky menus and obtuse gameplay elements decipherable only by the most dedicated. There is simply not enough enjoyment to be found when the user experience is this low of a consideration in game design.
Score: 7/10

Best Pokémon Games Of All Time
5 days ago

Pokémon GO: How To Evolve Cosmoem Into Solgaleo And Lunala
3 days ago

Deals: Save On Switch Games And eShop Credit In Nintendo …
1 day ago

Pokémon Scarlet & Violet: How To Beat The Elite Four And…
4 days ago