Shane Breton Posted: Jun 17, 2022 9:00 AM
Category: Editorials 0
The Cycle: Frontier is a raid-themed first-person shooter that prompts the player with the opportunity to become a Prospector. A Prospector is a player-character tasked with orbital dropping from Prospector Station to the surface of Fortuna III to complete various missions and come out with the best gear possible.
As a Prospector, your livelihood depends upon your ability to loot, kill, and extract from Fortuna III before its climate, wildlife, or other Prospectors end you. The Cycle: Frontier starts your Prospector in the lobby on Prospector Station. You gain access to all three factions and their trades, your apartment, the crafting center, the general store, and the Fortuna shop. Every faction, akin to Escape From Tarkov traders, has its own shop with unique weapons. You get access to these unique shop items via missions that factions give you.
Completing faction missions gives faction experience, and when a Prospector reaches a certain level in a given faction, they are given the ability to purchase a specific weapon from that faction. “The Cycle” goes as follows: a Prospector gets a mission, they then drop onto Fortuna III with the loot they bring in intending to complete their missions. Completing the missions, or tasks such as mining, fighting, and scavenging for materials, gives the Prospector access to better loot, and more of it. Rinse and repeat.
When playing through the tutorial of The Cycle: Frontier I was immediately hit with a unique, yet familiar feeling. The guns and healing felt like Apex: Legends. The world around me looked like games I have played before, and yet I couldn’t pinpoint one.
One thing that stood out was The Cycle’s excellent atmosphere it creates. It was ominous yet cartoonish and fun. The gameplay loop, felt similar to Escape From Tarkov, while also feeling different enough that it didn’t feel like a carbon copy.

Prospector station helps to sell this excellent atmosphere. The hub where players queue up, accept missions and more,  there was movement all around me as players went to the faction, shops and geared up for their next drop. Though I was dropping alone, it felt as if I had a community on the station. When I was able to enter my apartment, the loading was transitionless and quicker than any game I have ever played. When dropping onto the surface of Fortuna III, I was greeted with a loading screen that took less than 10 seconds to put me into my “Feet First Into Hell” drop pod. I was amazed at the loading speed and at the atmosphere of the world around me.
Besides the Halo: 3 ODST feeling I was getting from the drop pod, the environment around me felt lived in, and abandoned. The Cycle’s world of Fortuna really felt alive. Every creature I encountered seemed native to its environment, adding to Fortuna’s immersive nature. Unlike any other game I’ve seen before, The Cycle: Frontier used a raid timer like no other. 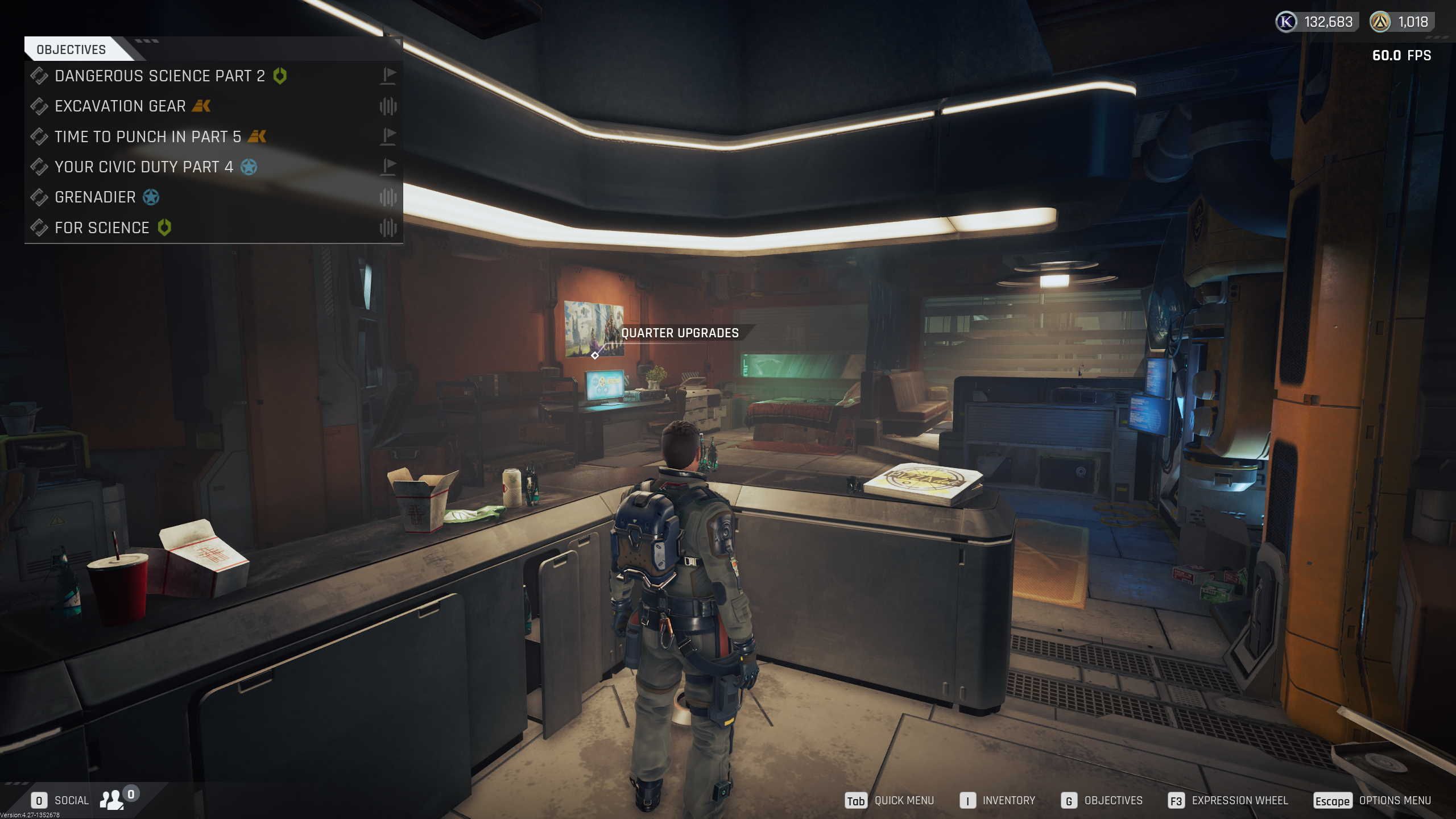 As previously mentioned, the climate of Fortuna III is a force to be reckoned with. As the raid goes on longer and longer, the weather progressively gets worse. Your extraction ship, which acts as your Prospector’s ride back to Prospector Station will not pick you up if you wait too long and the weather becomes dangerous on Fortuna III. The Cycle’s raid timer may be its most immersive aspect. Through purely the weather alone, the game puts pressure on you to leave and over time, lets you know that you don’t have much more time on the planet before you are stranded and killed by its storms. There is no clock, helping you plan your time left on the surface, only your sense of the severity of the environment around you.
The environment may be engaging, but the gameplay in The Cycle leaves much to be desired. The gunplay in the game feels weighty, not leaving your character encumbered by the gun they are holding, but the guns feel weighty in their recoil and general movement. However, the movement, audio, and hit registration have room for improvement. During gameplay, I was always surprised at how stiff the movement felt. Prospectors move fast, and have more than enough stamina to do so. It wasn’t often when I would get slowed down by the stamina bar or the movement speed. More often, the lack of smooth transitioning between jumping, mantling, crouching, and running made the game feel stiff.
All of my movements seemed as though they caused my Prospector to stop in their tracks for a moment to initiate them. With how fast the movement speed is in The Cycle: Frontier it was always faced with a slowdown of transitioning. The clamber animation causes the player to a dead stop, it carries no momentum. Often when I was attempting to clamber in-game, especially in rapid succession, I would simply jump instead. Because jumping slows or stops my momentum, it leads to slow maneuvering over and around surfaces. Due to its clunky nature, the movement would stop me in my tracks, while loudly revealing my whereabouts to enemies around me.
This reveals another issue with The Cycle: Frontier, the audio. While the audio is convincing and helps the environment feel engaging with the player, the spatial audio in the game is inaccurate if not desynced from its source. Often times I would be needlessly wasting valuable raid time checking around me due to a sound I made. For instance, stepping on gravel often would lead to the sound coming from behind me or my side, not from under me. As you can presume, hearing a random walking sound to your left due to audio desync can lead you on a wild goose chase, or have you wasting time checking angles when another team of prospectors is approaching from afar. This isn’t the only in-raid technical issue I encountered. The hit registration at times in this game feels perfect, sometimes though, I found myself getting shot from around the cover. 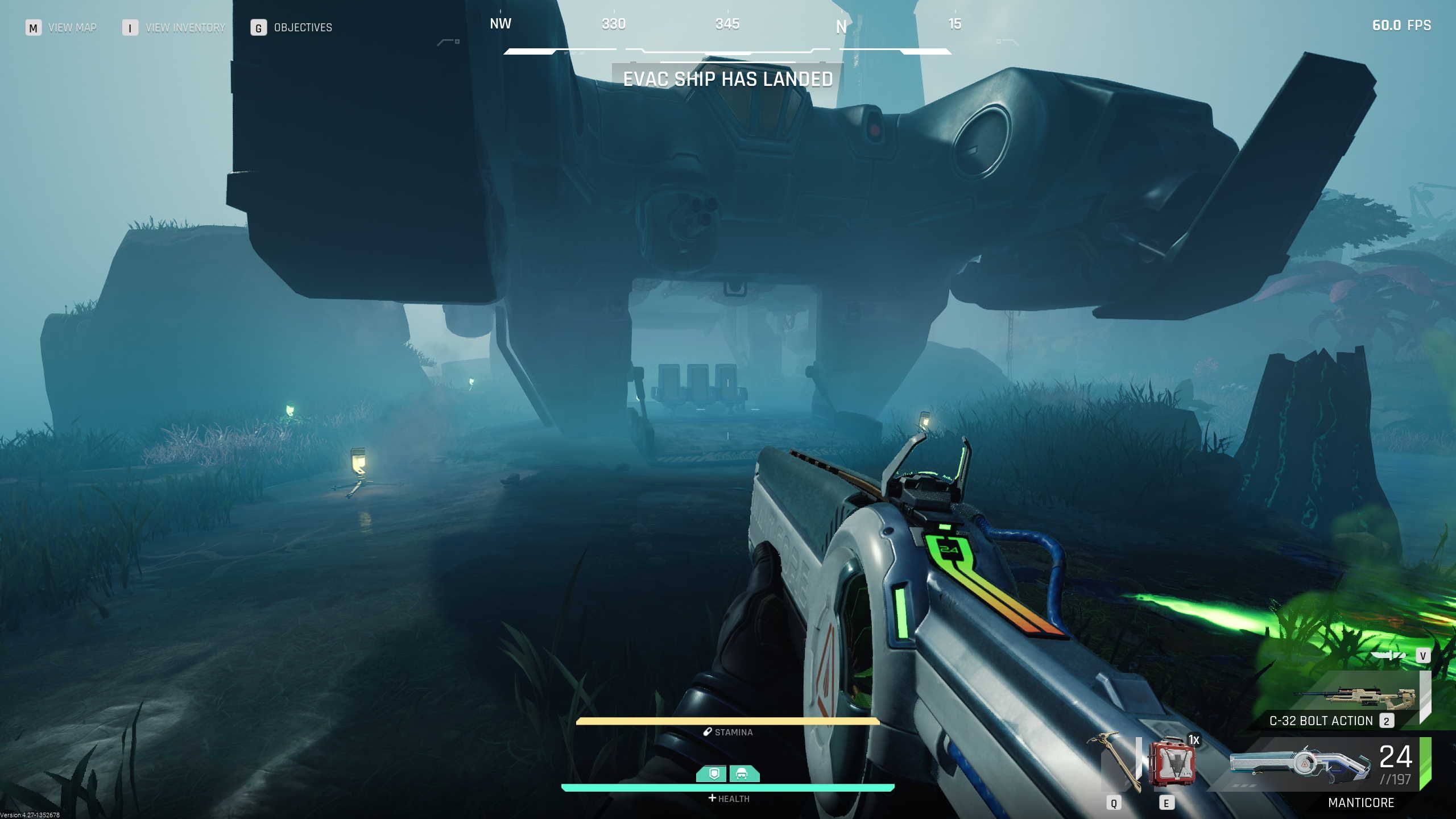 Most recently this occurred when I was fleeting from a gunfight, I had moved behind a rock, which are impenetrable in The Cycle but, I ended up dying to a shot I heard hitting the rock behind me and to my right. It is as if, sometimes the hitbox is delayed from my position, leading to frustrating, or interesting situations.
The Cycle: Frontier also has some frustrating game design and what feels like pay-to-win interactions. The Cycle has fast-paced movement, as noted previously, and therefore has fast-paced gunfights. Though, everything other than moving and shooting is slow. The reloads, healing, and utilities are all a slow process, if you need to heal during a gunfight, you will have to get into cover, except, that leaves you an easy target to be pushed by an enemy and killed. You can’t run while healing, meaning that retreating from the gunfight is likely to get you shot in the back.
This punishing gameplay would not be an issue if The Cycle: Frontier allowed you a chance to win a gunfight against someone who has better gear than you. If a player has a better gun and armor than you, they will take longer to kill, and it will take them less time to kill you. If two players have the same skill, but one player has better gear, the player with worse ger will have no chance of winning the gunfight, and since they are punished for retreating, healing, or attempting to outmaneuver their opponent due to the slow nature of all of those options, they are likely to die.
This puts non-payed players in a precarious position, if they fall behind average progression, they are more and more unlikely to win a gunfight and get better loot, if they cant get better loot, what then is the point of The Cycle. This issue manifests itself further when pay-to-win is introduced. In The Cycle: Frontier, players are given the option of buying higher and higher tier starting loot via DLC. The player who pays more has an easier time winning gunfights than those who don’t pay. By definition, this is a pay-to-win system, which makes this game a vicious cycle for any new, free-to-play players in Frontier’s future.
Overall, The Cycle: Frontier is a game with excellent environmental immersion, constant engaging gameplay and decent gunplay. The Cycle suffers from what feels like a pay to win system, that is supported by a set of conflicting design decisions, bugs, and clunky movement. The Cycle: Frontier, through these flaws is still a fun, engaging fps experience to enjoy.