Tired of Madden Mobile just getting new players, some new events and making you start over with your team every year? You’re in luck, because Madden NFL Overdrive (Free) is something akin to a brand new game, one that goes further away from being just a mobile Madden Ultimate Team (though it still shares some of that DNA) and branches off in a heavily PvP-oriented new direction.
How far? Well, the Overdrive mode for which the game is named is as close as the mobile version of the Madden franchise has ever gotten to live PvP. You and an opponent are both playing offense against each other’s defenses at the same time for three minutes, like you were having side by side scrimmages on adjacent fields. Your job is to outscore your opponent, but with a fantasy scoring system that means it’s not just traditional football scoring that matters.
There’s also the Overdrive mechanic itself to consider. During PvP games, you have a meter that slowly fills while you play until you reach a maximum of five points. Those points can be spent on a variety of offensive and defensive boosts that can help you or hinder your opponent, at least until they remove them by fulfilling certain conditions. More powerful tactics cost more meter, and each successive time using the same tactic also gets more expensive. 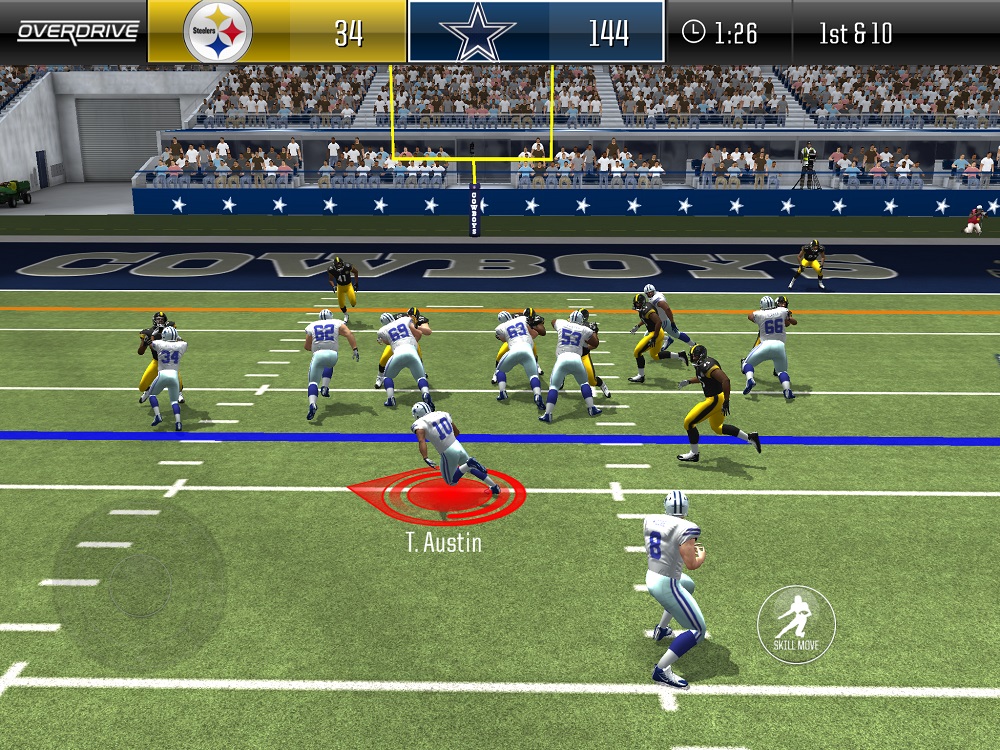 While there are many other new facets of Madden NFL Overdrive to discuss, let’s start with the most basic question of all.
Since you have just three minutes to outscore your opponent, there’s not much time to mess around considering each play call. But the normal rules of football still apply, with four downs to gain 10 yards and such, so you do need to have some situational awareness. That said, what really matters in Overdrive is the scoring system, one that, at least on the surface, appears to make multiple play styles viable. 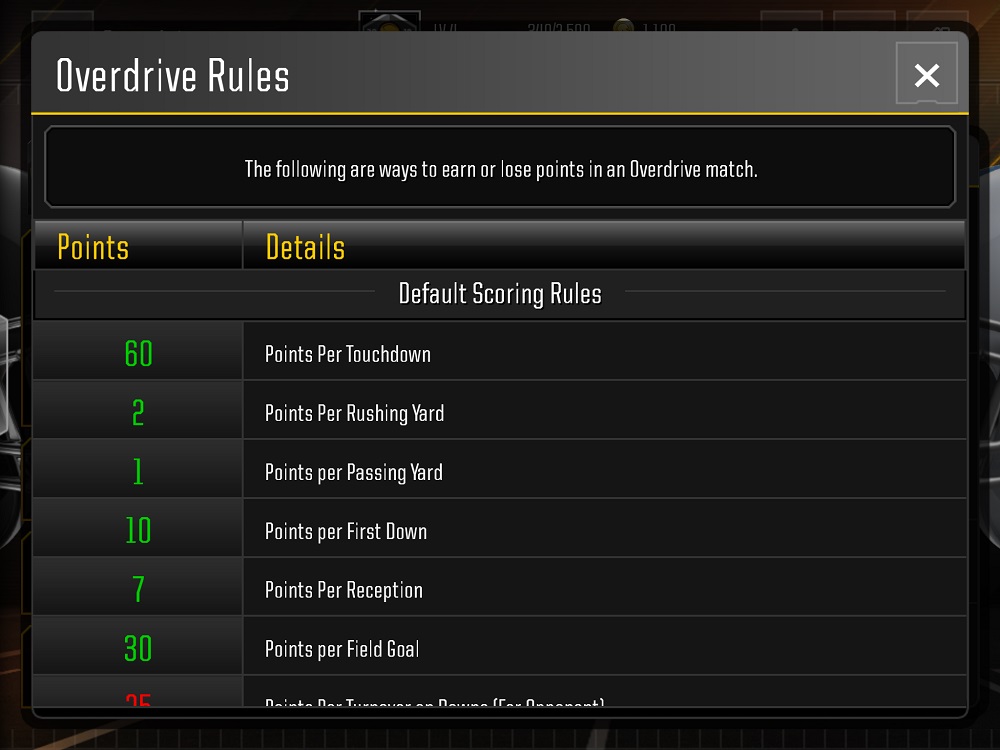 Performing badly also earns points for your opponent, as you can see here:
An added dimension comes in the form of captain bonuses. Every team’s captain has a specific criteria that, when met, gives you a one-time bonus per game. For example, Rodney Hudson gives your team a bonus once you’ve rushed for five or more yards five times. As you level up your captain, the bonus points given go up. 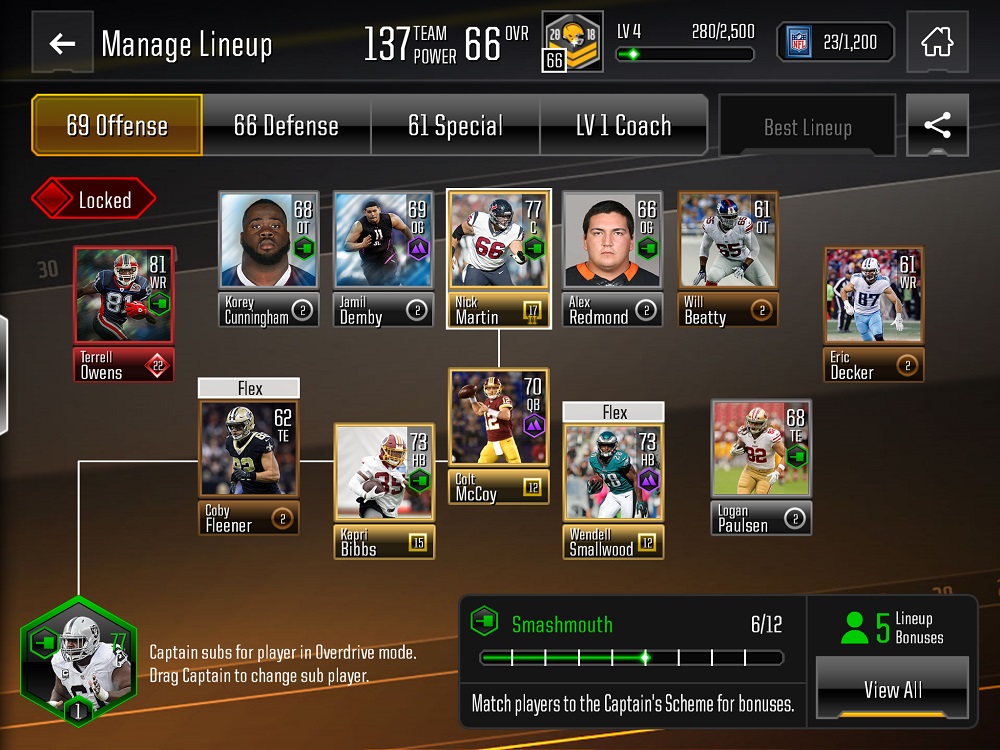 New to the game are captains, specific players who set the tempo and direction of your team on offense. While there are a variety of captains to unlock as you advance, each one is associated with one of four offensive schemes:
Each scheme has its own playbook, which depends on the captain you have active. Ideally, you want the captain to be in the lineup with as many offensive players as possible that fit that scheme (identified by a specific icon, though some players are scheme-less) as well as a coach from that scheme too.
In other words, if you come across an elite player who has an overall rating 14 points higher than your current running back, it might be wise to start him even if he is from a different scheme, but it’s at least more of a consideration in Overdrive than it was in previous iterations of Madden Mobile.
Last season, Madden Mobile was a training-fest, in the sense that your goal was to acquire Elite players and then train them up to their maximum level of overall stats. Not so with Overdrive, as most players can’t have their stats boosted at all. In fact, at least at launch, only captains have overall ratings that increase with training, and they have their own currency for doing so called Captain Badges.
That doesn’t mean that training isn’t still an important game, but to paraphrase the great Inigo Montoya, training might not do what you think it does. For gold or better players, using Training Points will increase their power level and not their attributes. 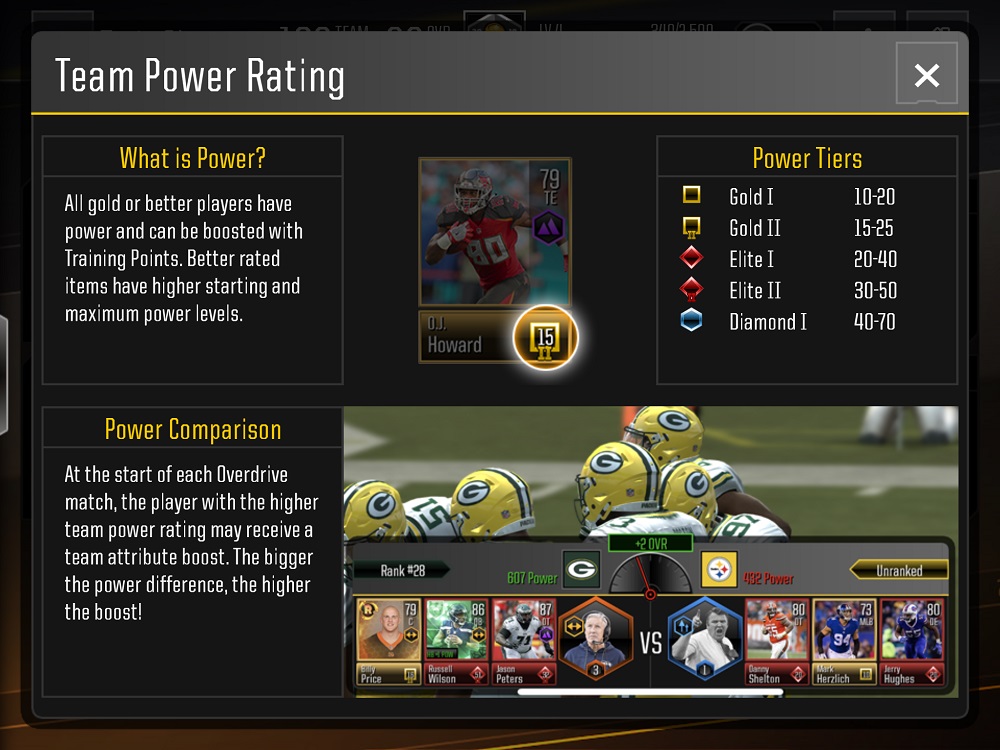 So what exactly is power? The total power level of each team is compared at the beginning of each Overdrive game, and the team with the higher power usually gets a stat boost that affects its entire lineup. The greater the difference in overall power, the larger that boost will be.
Getting more Training Points is pretty simple. There are Daily Blitz Events that reward you straight up with Training Points, plus other events that pay out mics that can be exchanged for Training Points in the Store. Finally, similar to Madden 19, most players and some other items can be exchanged for Training Points if you tap the ‘Item Exchange’ tab within the Marketplace.
Here’s where Madden NFL Overdrive gets a tad confusing. Gone are simply buying packs of new players for coins and Madden Cash, though those are still part of the overall package if you look hard enough in the Store. On top of those time-honored methods, there are now separate currencies for every type of ongoing program — League vs. League has crowns, 24/7 has mics, Team of the Week has badges, Diamonds has film reels, etc. Maybe we should count ourselves lucky that the devs at EA didn’t put even more programs into the game at launch, but you know darn well that more will arrive during the actual NFL season.
The important thing to do is not to panic. Remember that each program has its own tab in the Store, and that you are trying to earn that currency if you want to buy items from that tab. Many of the player acquisition concepts are the same as from previous seasons of Madden Mobile, including some packs that offer you a choice of multiple players with the same overall rating and different versions of the same player so you can pick one that fits your desired scheme.
Another handy tip is that the mics from the 24/7 program are kind of a catch-all currency of sorts. There is a program-specific player series called Headliners, but you can also trade mics for Whistles, Captain Badges, Blitz Tokens, Training Points and more.
This is perhaps the biggest point of contention players are voicing on launch day. It used to be that pretty much anything you did in Madden Mobile earned you XP toward increasing your player level. In Overdrive … not so much.
Personal leveling and progression is much, much slower, apparently by design. Notably, you don’t earn any XP for playing in events, and even though you won’t be playing those as often as you did in previous years, they’re still an important part of the game. But here’s what you need to know: Right now, there are only three surefire ways to earn XP to level up:
That last one isn’t going to level you up very fast, either, as its only 50 XP per Overdrive victory. 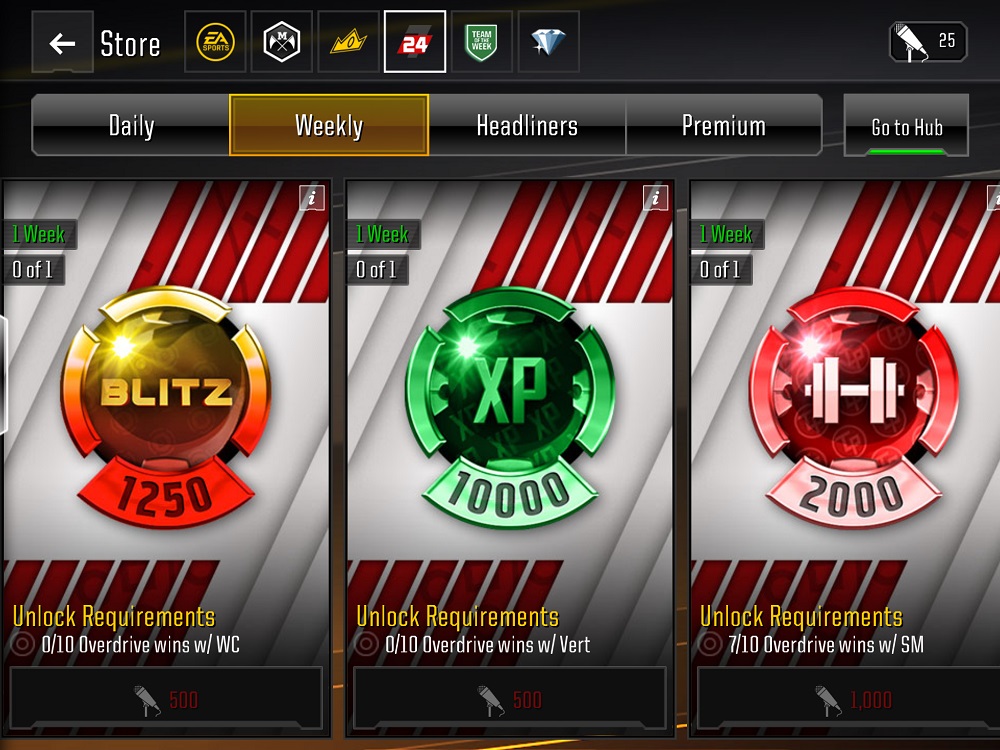 There are other ways, if you keep your eyes open. For instance, at launch, the ‘Weekly’ tab of the 24/7 Store offered 10,000 XP for 500 mics once you win 10 Overdrive games using the Vertical scheme. We’re not sure if it will ever be thus, but you can take it to the bank that there will be more methods to grab some XP as the season gets into full swing.
One of the first things you’re likely to realize about Madden NFL Overdrive is that the Energy system is gone. As in ding dong, the witch is dead. You can play Overdrive matches until your thumbs fall off. Viva la PvP.
What this game does in contrast to its predecessors is make the solo events a lot more restrictive than ever before. Weekly events can only be completed once and that’s it, though you can attempt them as many times as needed until you beat them. For daily events, you can play them once for free before you need Blitz Tokens to play them again.
Blitz Tokens can be acquired several different ways, but primarily, you’ll earn them by playing and winning in Overdrive mode. That means to maximize your playtime across all modes so that you are progressing as much as possible, your daily gameplay flow should look something like this:
Mixing in the Weekly Events and any League vs. League matches can help keep things from becoming too much of a grind. Also, every time you replay a Daily Event, the Blitz Token cost becomes higher for your next playthrough, so you’re likely to  be spending more time in PvP every time you get to that step — though considering how important it is to Overdrive, that’s not really a bad thing.