Madden NFL 21 for Playstation 4, Xbox and PC hits stores on August 28th, with new features and a new game mode known as ‘The Yard’. But for Android users, it has been out since August 6th, and for the first time features on-field gameplay as well as management mode, allowing players to enjoy this iconic sports game in the palms of their hands. A firm favorite with gamers for more than thirty years, each release of Madden NFL is hotly anticipated, and 21 is no different, with new features and a whole new game mode called ‘The Yard’, combining high-octane arcade-style action with character and plot development. With the game available for free (with in-app purchases and ads) for Android users, let’s take a closer look at Madden NFL 21 Mobile.

Originally launched by Electronic Arts (EA) as John Madden Football in 1988 for PC users, followed by Sega Genesis and Super Nintendo versions in 1990. EA hadn’t expected legendary American Football coach and commentator Madden to lend more than his name to the release, but he insisted on certain conditions, such as 11-sided teams, and that the rules of the game were strictly followed, saying “I’m not putting my name on it if it’s not real.” The game became Madden NFL in 1993, and immediately became one of the top sporting games on the market, developing in tandem with advances in graphics, capabilities and AI. John Madden took the Oakland Raiders to Super Bowl glory in 1976 and was inducted into the Pro Football Hall of Fame in 2006. Part of the appeal of Madden NFL is the authenticity – it features tactical setups from Madden’s own career playbook.
Madden has retired from providing the commentary for each game, but has stayed heavily involved, breaking down rule changes for the developers and even providing insight on such matters as player injuries and concussions. Many NFL stars are big Madden NFL fans – buying the new games on release and checking how their ratings have improved or declined – and sometimes complaining to EA about the matter! The series of games are among the most successful in video gaming history and has a loyal fanbase.
Taking the place of the Madden NFL mobile app that has been almost unchanged since 2014 (with updates annually, but no big rollouts), Madden NFL 21 is a real step up for football games on mobile devices. Essentially a football management sim, the idea is to manage your team and guide them to Super Bowl victory. In franchise mode, you take control of all aspects of the game, offensive and defensive plays, player trading and development, even ticket prices. EA has been criticized for the lack of development in franchise mode between Madden NFL 20 and 21 – but for mobile users, it is a chance to play this classic game on your smartphone or tablet wherever you are. The game is informed by expert knowledge and insight from NFL insiders, including Madden himself, and is already a hit with both hardcore football fans and regular gamers. 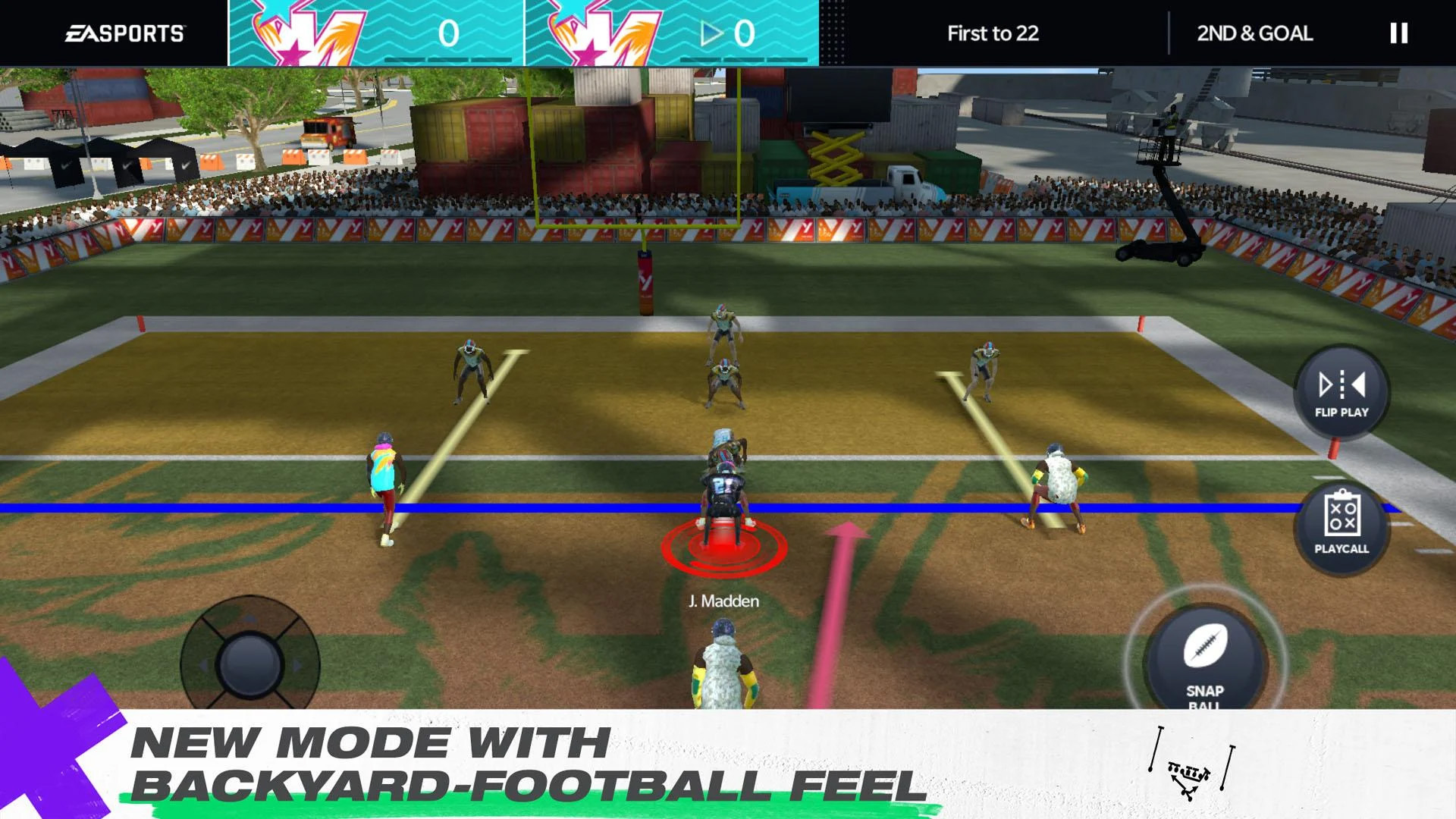 This release marks the first time gamers will be able to have the full Madden experience on their mobile devices. And even better, alongside Franchise Mode it features the new mode that EA has developed for the PC and console version ‘The Yard: Underground’. Essentially the next generation of Superstar KO, which featured in Madden 20, The Yard takes its cue from traditional backyard football, with smaller teams and pitches, and all-action gameplay. Backward passes, one-man rushes, trick plays and much more. It offers a more freewheeling version of the classic Madden game, with faster gameplay and a more arcade spirit. Better yet, you can design your own character, with your own unique avatar and plenty of crazy styles to kit yourself out in. The more success you have, the more your character and skills develop, and you’ll have more outfits to choose from. The Yard introduces a greater narrative element to the game, similar to career mode, as well as more fun and energetic gameplay, with 5×5 matches on smaller pitches.
Aside from the obvious – the controller interface – there are some differences between the console/PC and mobile versions of Madden NFL 21. The console version is multiplayer, either co-op vs the computer or online head-to-head, whereas with mobile you’re on your own. In ‘The Yard’ the matches are 5 vs 5, rather than 6 vs 6 on consoles. However, despite their difference, the games are designed to work in tandem, and you can build your Madden rank on either version, as they save accessories and the in-game currency.
This is the first year that EA has rolled out linked games, so the concept is pretty fresh and bodes well for fans of the series. Madden NFL 21, despite some fans’ misgivings about franchise mode, is set to get a new lease of life from The Yard: Underground, and may attract many new players via the free mobile app.


Google announces some much-welcome updates to the Wallet app.
With the development of new technologies, the gambling industry is also changing at a rapid pace. While some traditional forms of gambling are still popular, new and innovative ways to gamble are emerging all the time.One of the most significant changes that new technologies are bringing to the gambling industry is the rise of online …
Samsung partners up with more game-streaming services.
This tutorial explains how to add wireless charging to the Realme GT Neo 2.
Race your way into ultimate destruction with this new port for mobile platforms.
Terms of Service | Privacy Policy | Android is a trademark of Google Inc. | © Phandroid.com, 2007-2022