There are plenty of forgotten gaming franchises left behind by publishers as time moves forward. Many of these are mentioned regularly on social media, with fans clamouring for a surprise announcement of a series reboot. Games like F-Zero, Star Fox and Banjo Kazooie may well come back one day, but what about the lesser known series? What happened next in the life of Dr Muto? Is Rocket still a Robot on Wheels? What would a Vectorman game look like in 2022? Well we may not have the answers to those questions, but we do get to play a Kao the Kangaroo game this year.
Until today I had forgotten that Kao the Kangaroo was an early 2000s platformer. Originally launching on Dreamcast, the marsupial headlined two sequels and a couple of Game Boy spinoffs before vanishing in 2005. Now Tate Multimedia are bringing back Kao for the modern era of video games, and before the summer launch I had the opportunity to play a level of the upcoming punch-em-up.
It’s a family affair for Kao this time around. With his sister missing, Kao will be once again donning his magical boxing gloves. Alongside this tragedy, he’s also got a long lost father to investigate and various martial arts animals under the influence of a dark power to dispatch. It’s going to be a busy summer for our furry hero. 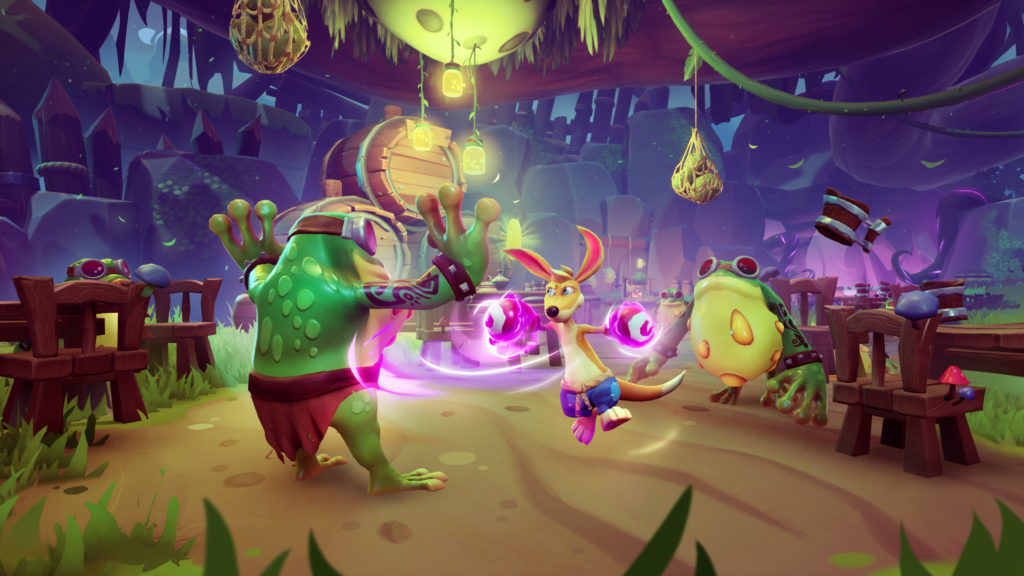 The stage I got to play seemed like a pretty early one, set in a dark forest full of dangerous swamp water and frogs looking for a scrap. Although perhaps not the best place to show off the colourful art style of Kao, it was still a rather striking backdrop to jump around in.
Controlling Kao is incredibly straightforward, with a moveset that anybody who’s played a 3d platformer will instantly click with. He can jump, double jump and spin in the air like any good platforming marsupial, alongside a roll and some cheeky combat skills. There’s more than a slight whiff of Bandicoot in quite a few aspects of Kao the Kangaroo, right down to the level of polish put into every aspect of the game.
It wouldn’t be a 3d platformer without collectibles, and there are plenty to gather in Kao. Coins are scattered everywhere, as well as a certain amount of gems, scrolls and the letters that spell our hero’s name. Because the demo was only a single stage I have no idea what they are needed for, but they sure were nicely and appropriately hidden in crevices between bad guys. 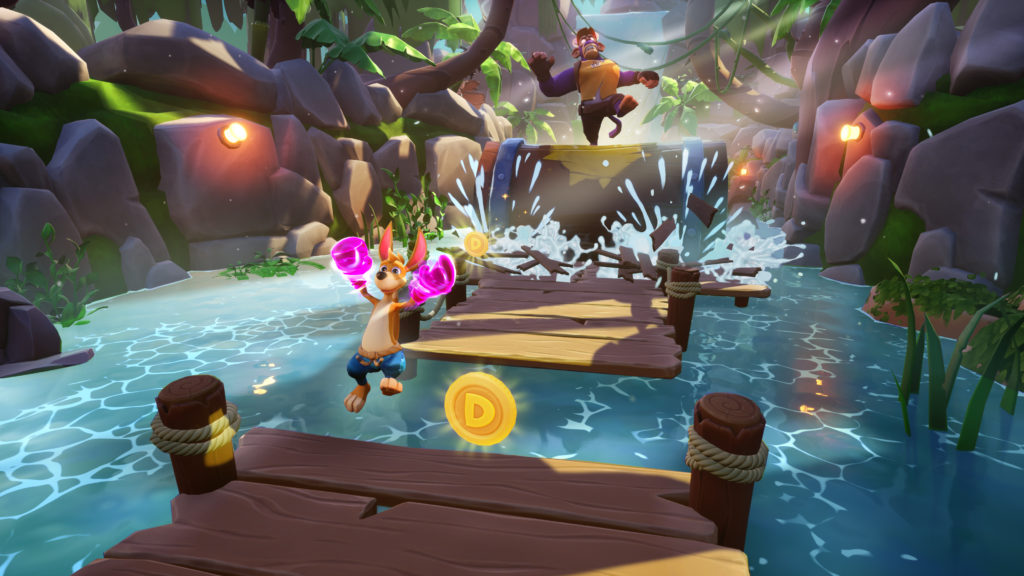 Combat in Kao the Kangaroo is simple but effective, with an amount of punching you’d expect from a boxing glove wearing protagonist. A few bashes of the X button will let loose a three punch combo, and once you’ve built up a special metre you can use Y to send out a powerful shockwave attack. I also got to try out a single use boomerang, which was particularly useful for sending heavy weights dropping onto unsuspecting frogs for an easy croak.
There were a few interesting elements in the stage that I appreciated. One section involved hitting crystals to activate otherwise transparent platforms. Another saw progress blocked by a wall with a circuit puzzle that involved spinning tiles around. I’m hoping that the variety keeps coming in the full release.
Kao the Kangaroo is showing signs of being a fantastic 3d platformer, but from the demo level I didn’t really see anything particularly unique and exciting. Obviously I was only able to say one level though, and the level of polish is immediately apparent. If collecting doohickeys and jumping over spikes sounds like a good time, Kao the Kangaroo should probably be on your watchlist.
Kao the Kangaroo will launch on PS5, PS4, Xbox Series X|S, Xbox One, Nintendo Switch, and Steam this summer. There’s a free demo on Steam right now.