When I think of a mascot platformer, I imagine a cute little animal collecting gems while avoiding slightly more threatening creatures. Extreme gore, Nazi faeces and the visceral tearing of body parts from a live sheep aren’t usually seen in the latest Mario or Crash game. As you might have guessed, Hell Pie isn’t your everyday mascot platformer. It is however much more than just blood and shit jokes, as I found out while playing the upcoming demo.

As the Demon of Bad Taste, Nate, you’re entrusted with the important task of baking Satan’s famous birthday pie. Apparently this is a job that requires more than just eggs and sugar, as there’s a whole list of ingredients you’ll need to collect to satiate the ruler of Hell. This means running through a plethora of horrific and grotesque stages with your angelic pet Nugget, and gathering tampons, insects and other inappropriate ingredients.
There’s only one actual level of Hell Pie to play through in the demo, but it’s packed full of items to collect and gives you a nice taste of the gameplay. Nate controls like many other platforming heroes, with a jump, double jump and dash at his disposal. What sets our demonic protagonist apart is actually his tubby angel ally. 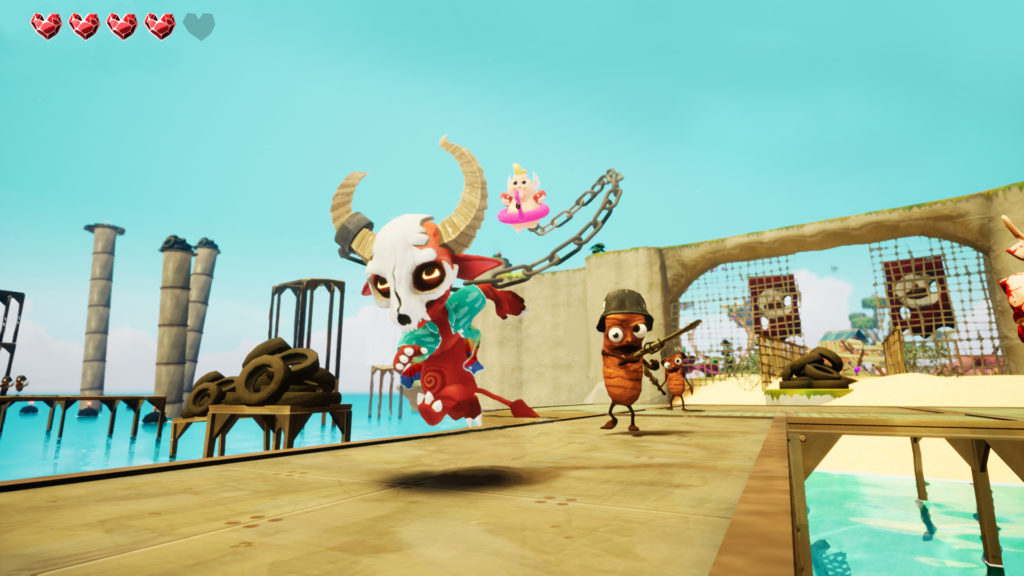 You see Nate and Nugget are chained together, and you can use this to your advantage. Mid-jump you can use Nugget as a sort of living grappling point, and Spidey swing your way to the next platform. By chaining together jumps, dashes and swings you can get to hard to reach places with ease. It’s a really great addition to a fairly traditional platformer, and I was blown away with how much fun it is to maneuver through the world.
It’s worth checking every nook and cranny in Hell Pie, because if you find enough sweet jars you’ll be able to upgrade Nate and Nugget’s abilities. By default you can only swing once before returning to the ground, but with enough collectibles you can add more swings and plenty of other handy abilities. Extra health is always helpful, as is upgrading wall running for extra height. The best upgrade I got to try though was the boost grapple, which enables you to boost while hooked onto Nugget for some incredible acrobatics.
There’s a little bit of combat in the demo of Hell Pie (with the aforementioned Nazi poo) but it was pretty bare bones. The X button swings Nugget around by the chain, and he can be used as a melee weapon. There were also grenade plants scattered around the sewer level, but since all the turds died in a single hit anyway there wasn’t much point using them.
After beating a boss that involved actually using those grenades, I was given 15 minutes to explore one of the game’s 4 hub areas. On this sprawling beach there were a ton of routes to check out, islands to swing over to and collectibles to gather. This large area really shows how creatively you can use Nate’s abilities to propel from one place to another, and it was a joy to just make it to a platform that looked impossibly far away. 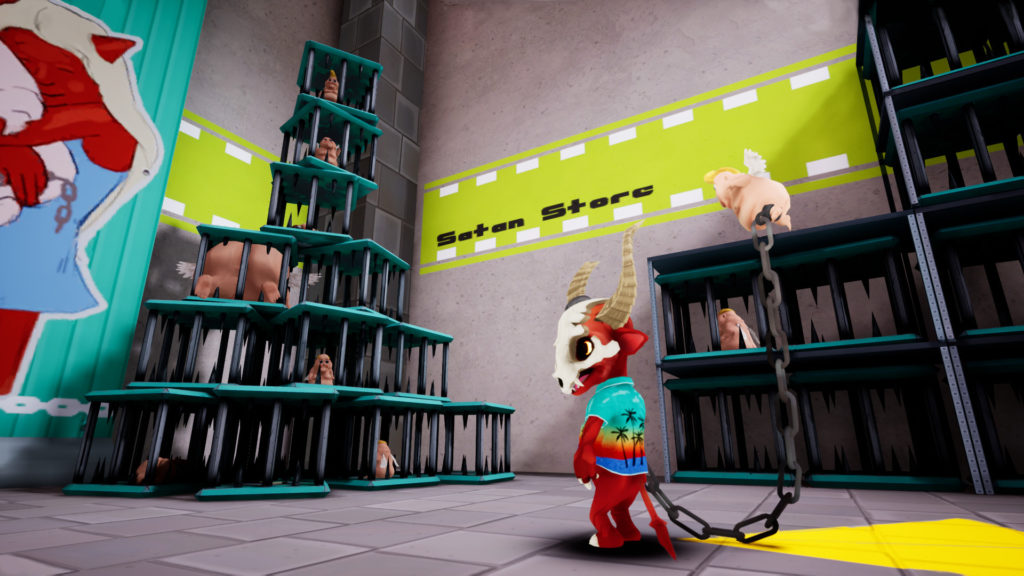 In the miniature open world, I was also able to find an altar that required me to sacrifice 4 adorable sheep. Through sheer luck I had gathered the exact amount of sheep en route to this altar, and was able to tear off their horns to unlock a new horn power for Nate. With his new horns Nate gained a charge attack that was able to break through certain walls and gives you a ton of momentum if you use it before grappling. It looks like there will be six of these abilities to use in the main game, and I’m excited to see what else I’ll be able to unlock.
I was genuinely disappointed when my 15 minutes began to come to an end. I’d barely scratched the surface of the collectible stacked hub area, and was enjoying discovering new horrific enemies like the fish with legs that try to dropkick you and once they’ve missed flounder pathetically on the floor. Getting to the end of the 15 minutes is definitely worthwhile, as there’s a fun surprise for those who stay until the end.
Hell Pie is looking like it’ll be an absolute treat at launch, with old school collectathon gameplay and superb motion thanks to the grappling mechanic. I don’t think everyone will gel with the early 2000s gross out humour, but there is much more to Hell Pie than just laughing at tampons. If it sounds like a game you’d enjoy the demo will be available to download on Steam tomorrow at the time of writing, and I’d definitely recommend giving it a go.

Hell Pie is coming to PC at some point in 2022, there’s a demo available for it on Steam.