Five hours into Ghostwire: Tokyo, and I’d finally started to ‘get’ it. It was a bumpy beginning, though. For starters, the movement is rough around the edges and rather slow at times. The controls lack the responsiveness or smoothness of titles like Deathloop and Dying Light 2. Even at the end of chapter two, I was still not sold on the gameplay side of it. However, despite my reservations with that side of things, there’s a lot of cool stuff going on.
The story of Ghostwire: Tokyo sees Akito, a regular Japanese citizen, brought back from death by a spirit known as KK (not the dog from Animal Crossing, unfortunately). He imbues Akito with special elemental abilities to take out ghostly beings known as Visitors that are roaming the streets of Tokyo, threating to wipe out the population. It’s pretty standard stuff, but there’s a narrative thread involving your sister, as well as the mysterious figure that appears to be involved in the swarm of Yokai populating the city. 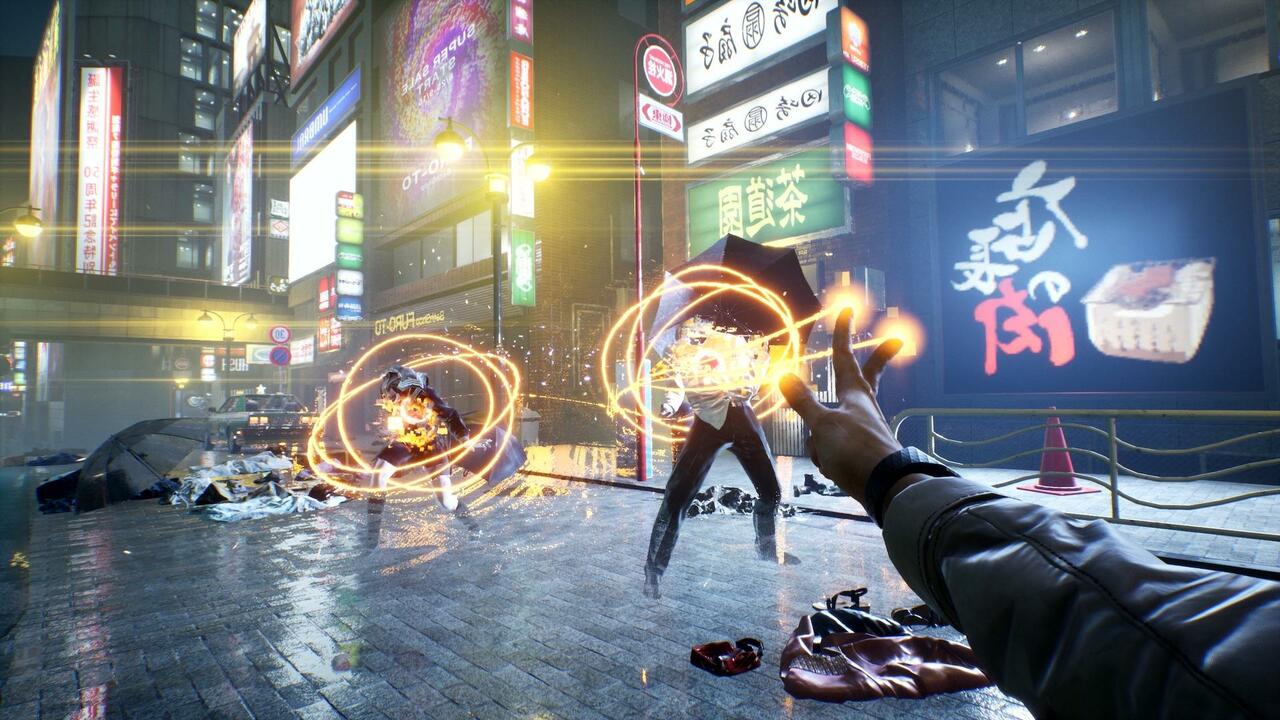 So what is good about Ghostwire: Tokyo? As someone who has been possessed by a spectral entity, it has its bonuses. You are given forms of attack known as Ethereal Weaving. You harness the power of wind, fire, and water. With each one, they can take out Visitors in a multitude of ways by firing these powers directly at them. They can also be charged by holding in R2 for added damage. There’s also a bow and arrow that can be used, even when KK isn’t a part of you. These enemies slowly lose health. When their core is exposed, you can finally destroy it and vanquish them for good. If you don’t, they’ll recover and keep fighting back.
There are also items known as Talismans than can be used to shock enemies and more. If you’d rather sneak up behind Visitors, a Quick Purge (stealth takedown) will dispose of them instantly. Visitors all have different attacks, and sometimes they’ll sneak up behind you. Due to the slow movements (which can be altered in the options), it can be tricky trying to fight multiple enemies at once. Even with changing the sensitivity of the X and Y-axis, I was never completely satisfied with turning or looking around. You can block, but there was just something that never gave me the feeling of complete control of my actions. 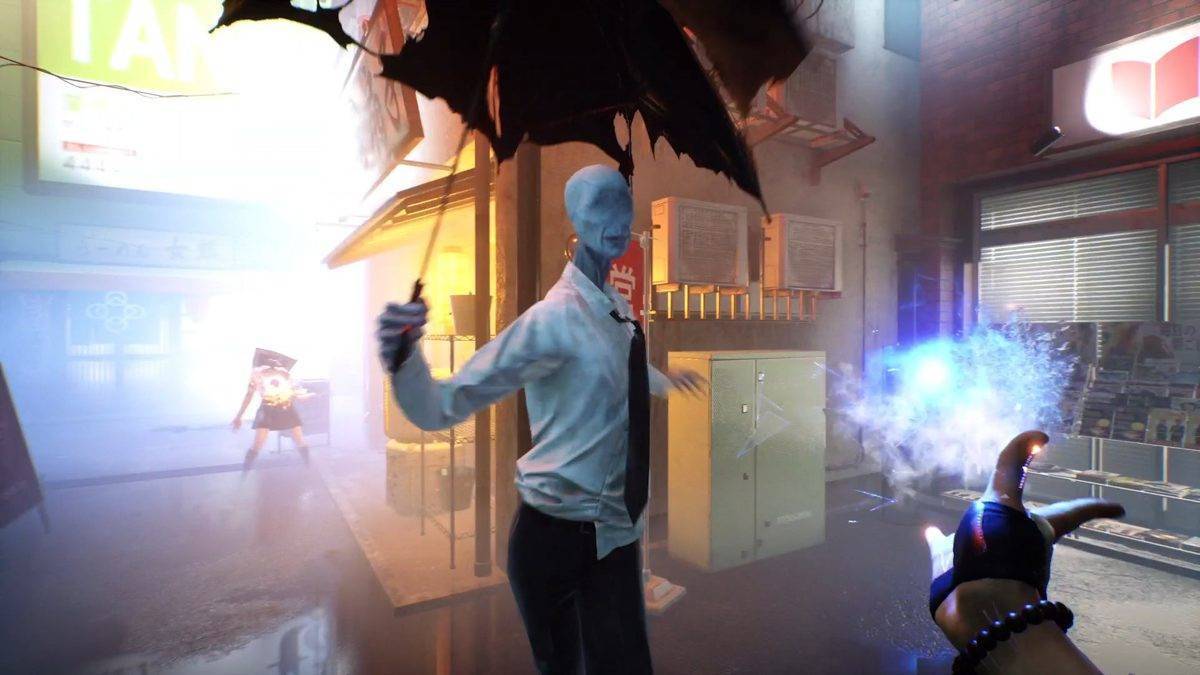 That said, there’re some cool aids to improve your abilities and skills. Every time your Synergy level goes up, you gain additional HP and can put skill points into three categories. These will help improve a multitude of things from health items healing you more, or adding a stronger charge to your Ethereal Weavings. Jizo Statues litter the streets, and when interacted with, will improve the amount of ether (the number of charges abilities have) each ability can hold. Crystallised ether can be smashed to fill up your elemental attacks, too.
Akito can make offerings for temporary buffs; equip prayer beads for constant buffs; and also visit Shinto Shrines to read Omikuji for other additional effects. On top of all this, an item known as a Katashiro will collect spirits of the dead that fill the streets of Shibuya. Once you’ve reached the maximum number of ghosts it’ll hold, you visit a payphone (known as a Spirit Transmission Device) and exchange them for XP and meika, the game’s currency. There’s a lot of help on offer in Ghostwire: Tokyo, but whether you’ll make use of it remains to be seen. I didn’t make much use of anything other than the Katashiro, but with more time these other perks will hopefully play into the bigger picture. 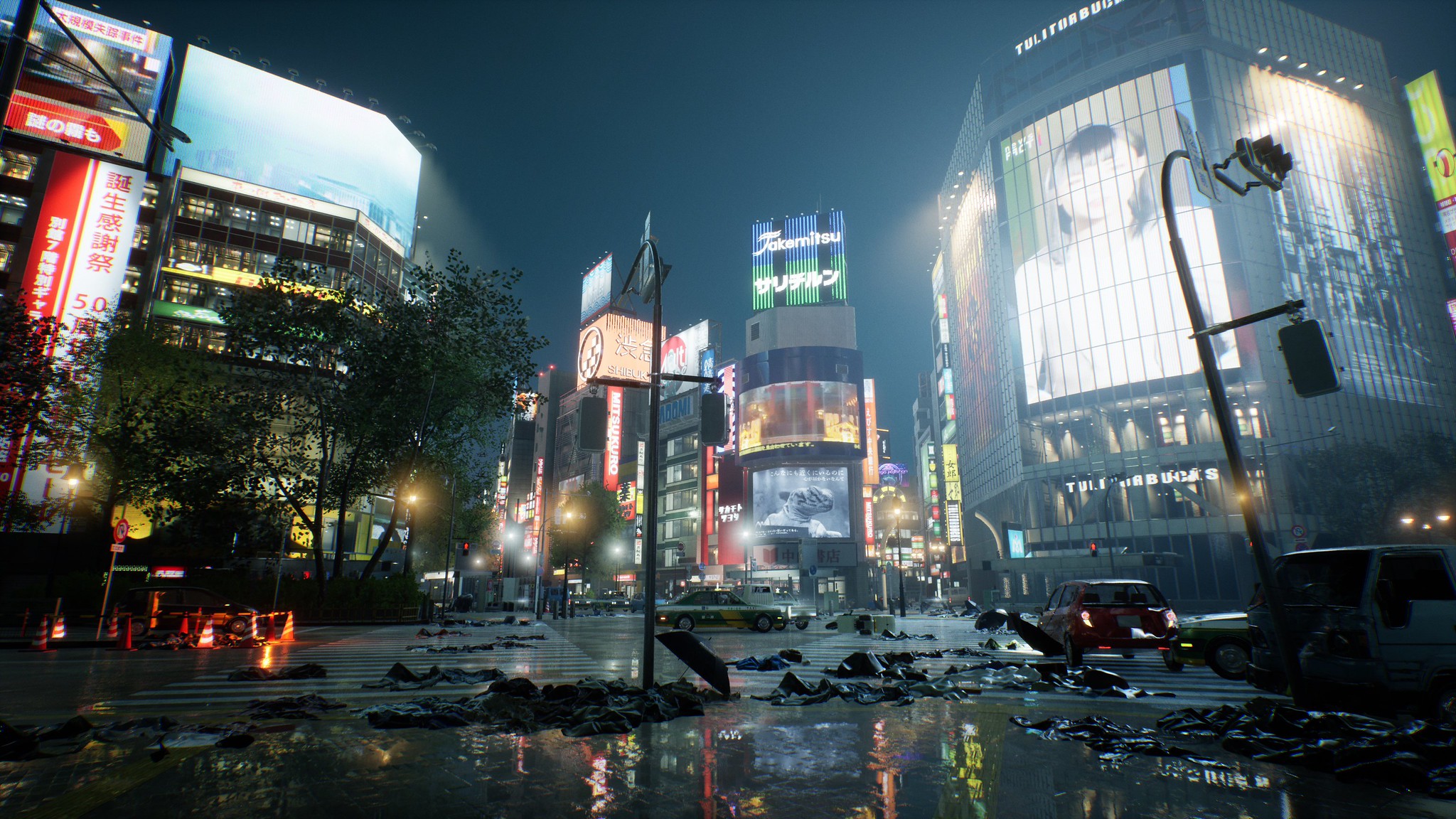 Another mechanic you’ll use a lot in Ghostwire: Tokyo is Spectral Vision. This lets you see any nearby spirits or enemies, as well as giving you guidance on your next objective. It’s essentially a detective mode that highlights anything of importance. There’s a lot of stuff to factor into Akito’s adventure. Hand Seals block certain pathways, and by using the right stick to mimic a pattern, they can be removed. You can zipline up to Tengus that hover in the air, giving you access to higher places. There’s also the option to glide across the city, letting you get from one building to the next with ease.
Shibuya is a beautiful place, even if it is teeming with spirits that want you dead. With plenty of options to get around, its gorgeous taking in all the neon sights that Tokyo offers. As pretty as it is, there’s a dangerous fog that engulfs much of the environment. Finding Torii Gates and large shrines will eventually clear the fog, but there’re often plenty of Visitors swarming around. Ghostwire: Tokyo is filled with stuff to do. I vanquished the house of a hoarder filled with Yokai and helped out Japanese raccoon dogs known as Tanuki, all while trying to figure out what was going on in the main story. Side quests are everywhere, and they’re a nice distraction from the campaign.
Ghostwire: Tokyo is a bizarre box of tricks. Although I’m only two chapters in, there’s so much fun stuff to do and a gorgeous and weird world to explore. The story is interesting, and finding out more about the Visitors that plague Shibuya is something I’m excited to do more of. I doubt the fluidity of combat and movement will change, but I’m hoping I get used to it more as the game plays out. It may not be what I was expecting, but I still want to play it, and I can’t wait to see what other weird stuff happens as I play.
Ghostwire: Tokyo is out on March 25 for PS5 and PC.