March 15, 2022
Imagine a world where climate change doesn’t bring on a bunch of crusty protestors laying down in the road, but instead unleashes The Nephilim – a plethora of enormous, murderous kaiju monsters that emerge from the ground and beneath the ocean to destroy us all. That is exactly the scenario you face in Dawn of the Monsters, and precisely why you should all get an electric car and start reducing your carbon footprint.
Forget about your responsibilities to the planet for a minute though and just manoeuvre your brain into that sweet spot reserved for stuff like Godzilla vs Kong and Earth Defence Force. This riotous scrolling fighter is an all-action homage to the giant monster genre that has bewitched nerds like us and the wider public for aeons. 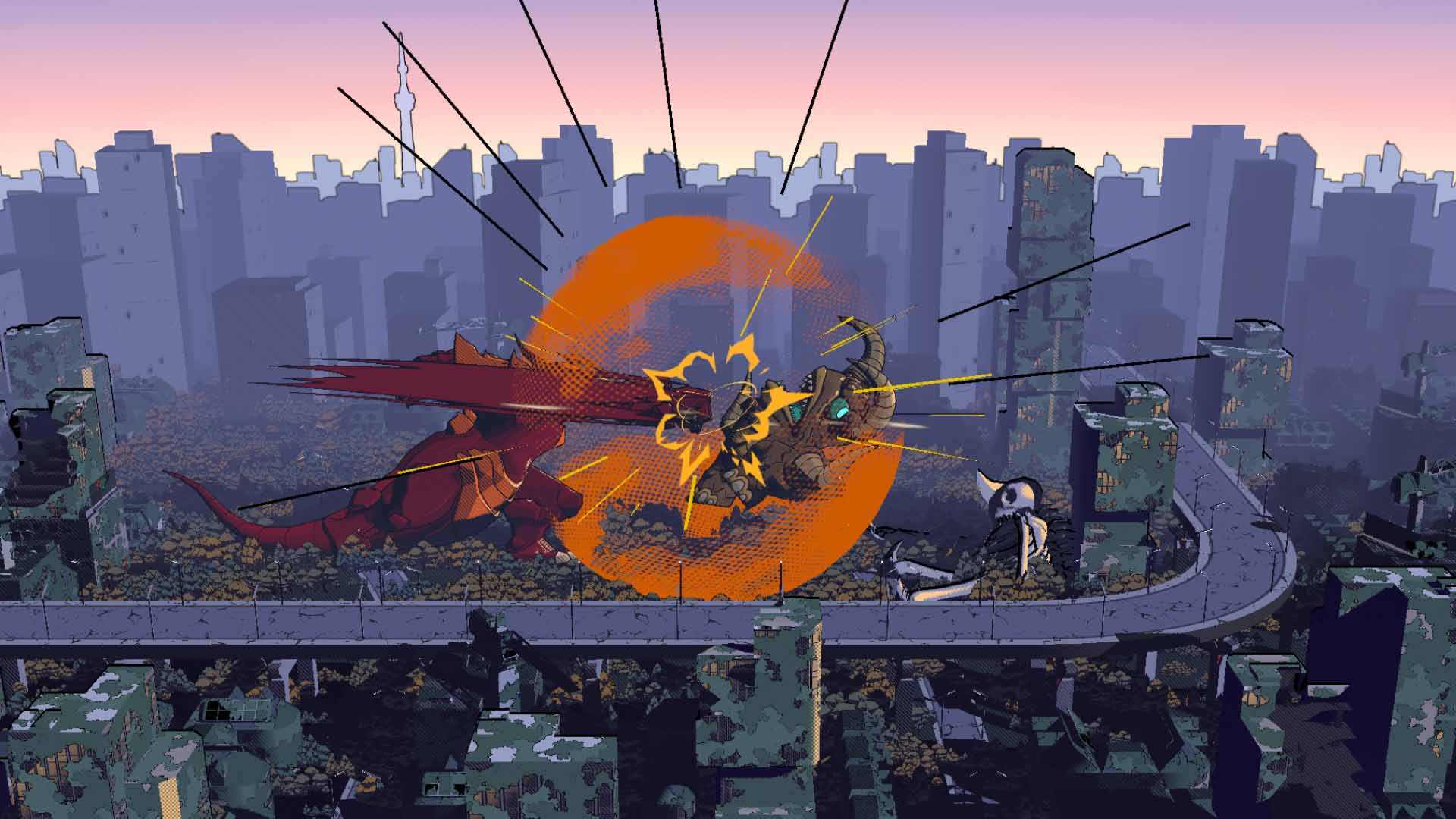 It puts you in the giant shoes of four well-conceived and distinctly unique playable behemoths, ranging from an Optimus Prime/Ultraman hybrid to two members of the Nephilim who have been harnessed to switch sides and smash things for the good guys. One of these arcane monsters, Ganira, has an ability I have myself long since coveted – to summon a personal crab minion to take into battle. Megadon, on the other hand, is a big ‘ol red lizard that shares the ability to trigger explosions on an almost nuclear scale, just like the big green guy that has been wrecking fictional Japan since day dot.
This is a simple game on the surface that asks very little of you – defeat all the enemies, smash your gloriously destructible environment along the way, and save the world. But there is a real depth that is in keeping with recent additions to the beat ‘em up genre, and elevates this way ahead of the games that obviously inspired it, such as the King of the Monsters coin ops. The four characters play completely differently and offer different loadouts and skillsets to appeal to your style.
This isn’t a button masher – there are defined combos. Collecting items hidden throughout the stages allows you to develop a skill tree of sorts called DNA Augmentations between levels. The game rewards skill – as the better you perform on any given stage is reflected in the quality of the augment boosts you can grab. Like a lot of belt scrollers this one is guilty of a bit of repetition and palette swapped foes, but you will probably be having too much of a hoot crushing them into the Earth’s crust to care. The bosses on the other hand, are far from unimaginative and there are some memorable encounters to be had along the way. 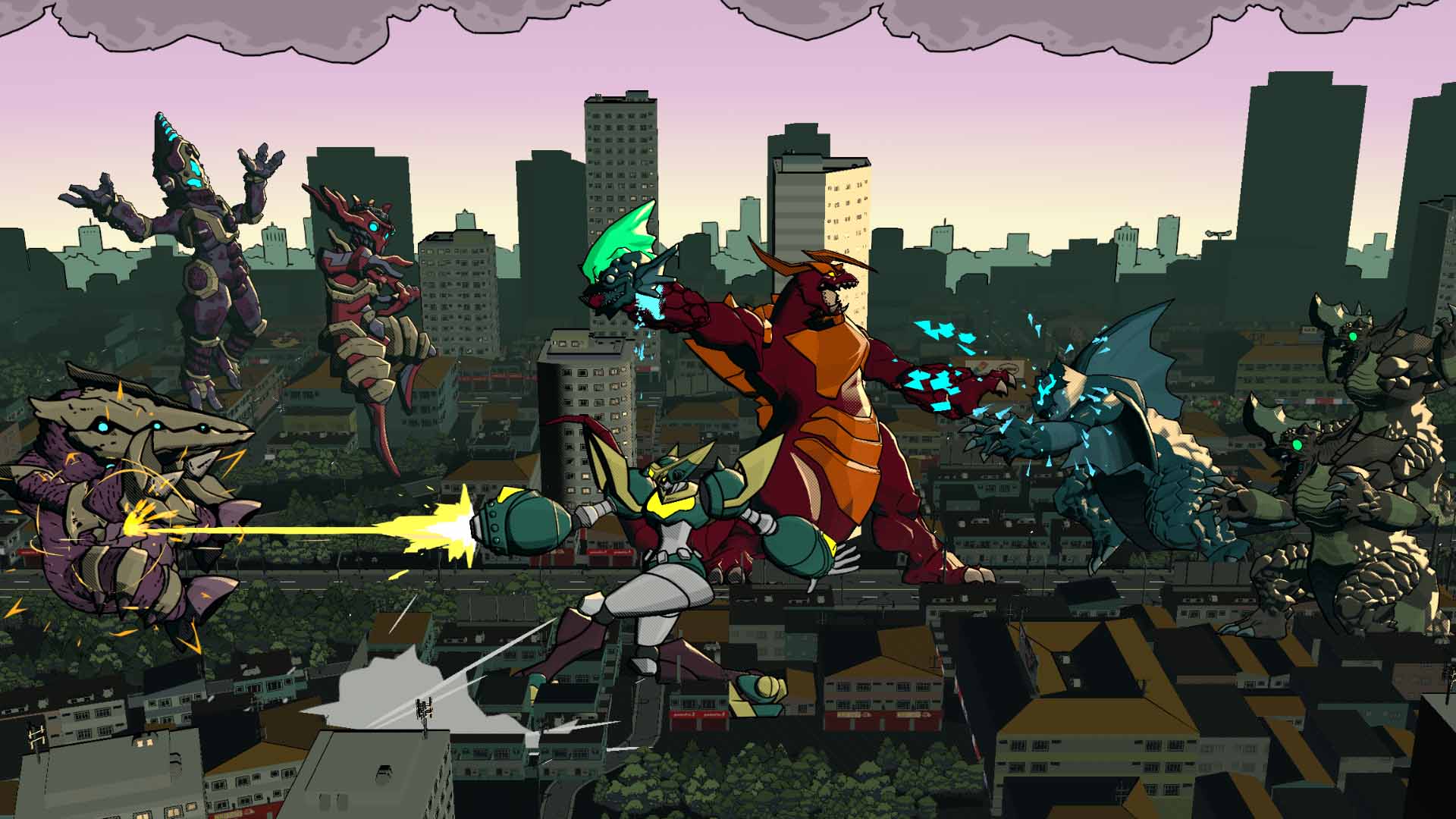 There is a great deal of unlockable content, with artwork, skins and suchlike to tinker with – but the story is a monster movie corker, and there is a tremendous commitment to it’s lore, with some amazing artwork and descriptive content that makes you really invest in your battle with and against the Nephilim. In-game looks ace too. The use of lovely, timeless cel-shading recalls classics like Viewtiful Joe, and the action is underpinned by a thumping soundtrack and cacophony of speech, explosions and guttural roars.
Yes, there is a roar button. It is never not fun. What do you want from a kaiju game? Wholesale destruction, the feel that you are in control of something huge and powerful, the ability to manipulate your surroundings, but also to smash them to smithereens and have a good old fight. It is why I love games like Transformers Devastation and Incredible Hulk: Ultimate Destruction, and why this one has grabbed me in its giant monstrous claw and not let go.

Looks great
Loads of fun
Hidden depth
Some repetition
Yes, there is a roar button. It is never not fun. What do you want from a kaiju game? Wholesale destruction, and the feeling that you are in control of something huge and powerfu.